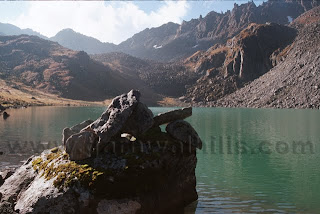 Nandi Kund is a located approx. 4800 mts. in Madhymaheshwar - kalpeshwar trail. The trail commands a beautiful view of lush green meadows and lofty snow covered peaks. There are some very old woods, which are worshipped, as belonging to the Pandavas. It is a lake spread over an area of one and a half km.
The Trail covers Madhymaheshwar, kachani Dhar, Pandav Sera, Nandi Kund, Ghiya Vinayak Pass (5200 mts.), Bansi narayan and Kalpeshwar. Shiva is worshipped at Madmaheshwar in the form of navel - shaped lingum. Located at base of Chaukhamba peak, at an altitude of 3,289 mts, the classic temple architecture belongs to the north - Indian style. The Pandav sera valley is 3-4 km. wide and local people believe that Pandavas stayed here for a long time, dig a canal and transformed it into a cultivable land. Ghiya Vinayak pass is really a challenging task for trekkers where one has to walk on big boulders and an descent slope towards Vaitarni.
Bansi Narayan Temple is 8th centaury temple and is a beautiful place to view Himalayan peaks. Lord Shiva is worshipped in the form of matted hair at Kalpeshwar. Kalpeshwar is a favorite spots for sages who come here to meditate, following the precedent of Arghya who performed austerities and created the celebrated nymph, Urvashi, here, and the irascible Durvasha who meditated under the wish fulfilling tree, Kalpavriksha.
I was thinking about almost decided Nandi Kund Ghia - Vinayak trek during our madhymaheshwar trip in August 2008. We (Raju Bhai, Ravi and me) met at Rudraprayag and reached Mansuna by Taxi and did night stay in lodge. We bought ration and medicine from Ukhimath. Here I searched a person Rajendra Singh, to whom I met few years back while my Kedarnath yatra. He arranged a porter (Pratap Singh) and we moved to Uniana next morning by taxi. 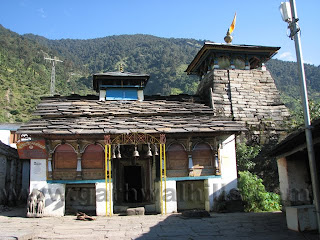 Real trekking started from here and we reached Gaundhar via Ransi. We saw devendra at Gaundhar who met us at Panchwati during Madhymaheshwar trip and at that time I proposed him to guide us for the Nandi Kund Trek. But due to mobile connectivity problem I couldn’t contact him. Rajendra Singh (our Guide) was not feeling good and not looking confident for the trek. We again asked devendra and he got ready with two conditions.
1. He would join us next day from Madhymaheshwar
2. Till Madhymaheshwar we will have to take the service of old guide
We reached at Madhymaheshwar by evening and stayed in costly lodge of Panwar. Next morning Raju Bhai & Ravi went to Budha Madhymaheshwar, while I did trek preparation at Madhymaheshwar. Devendra reached at 9:00 AM, so we sent Rajendra back. We did Puja and moved towards kachani Dhar. 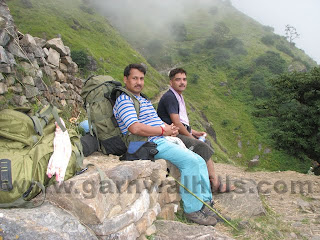 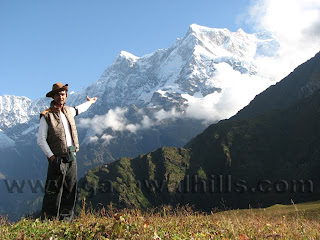 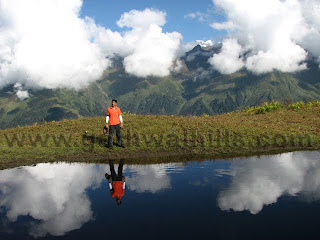 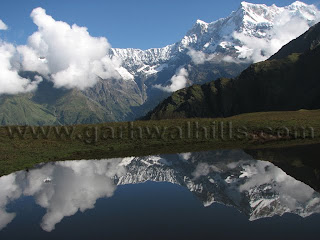 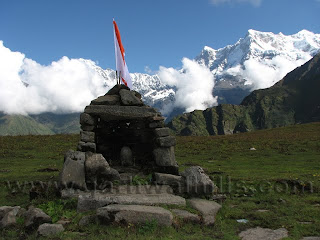 One can guess about the trail from madhymaheshwar, dense forest in starting, than long meadow and ascend rocky trail. Today we could cover a long distance If we would have started early morning but we moved very late. We found a camp site and camped near Bhairon temple. We saw some metal parts there, devendra told that these were the parts of a helicopter which was crashed in fifties. En-route we had carried some wooden pieces so prepared food using it. We went into sleeping bags early because we planned to visit Kachani tal next morning and then towards Pandav sera. So we got up early, did breakfast and moved to kachani dhar. Camp site was approx. 6 km. from Madhymaheshwar and kachani Dhar was 6-7 km. from here. Madhymeshwar was looking beautiful from here. Kachani Dhar is a ridge at 4000 mts. A straight rock at one side and a gentle meadow in another side. Kachani Tal is 2 to 2 and ½ km. from here and situated in a different route from Nandi Kund trail, having ascent climb. Kachani Tal is a bautiful blue green water lake. We stayed there for some time and returned from tough trail. The trek was hard from kachani Dhar without an identified trail. After 12 - 15 km. from kachani dhar we pitched our tent in rocky area. The place was not an ideal place for camping so we had to work hard to plane the area for night stay. 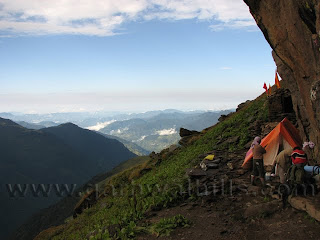 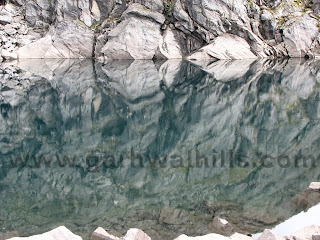 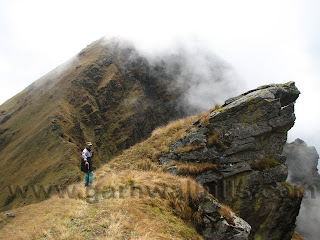 Next morning we moved to Pandavsera after breakfast. Pandavsera was 3-4 km. from here. Enroute we met a Bengali pair who were coming back from Nadi kund with some porter and guide. Pandav Shera is an amazing valley with special vegetation which looks like wheet plants. A beautiful stream is flowing among vegetation. Now the trail became tough and ascent climb in a rocky area. The whole area was abound by Fen Kamal and Braham Kamal so we were hiking carefully and trying to save the flowers. The trail was strenuous but the amazing beauty of valley was encouraging for trek. Guide had shown me the way direction so I was leading by idea. Now the oxygen level was down and the altitude was approx. 4800 mts. I waited in a place for the other members and we all got relaxed at that place. Nandi kund was near to this place but the trail was strenuous and we were unable to manage more then 1 to 1 & ½ km. / hrs. After 2 km. we reached near a river which was originating from Nandi Kund and looking like a man made canal. 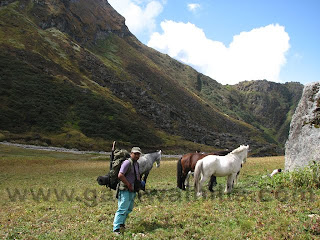 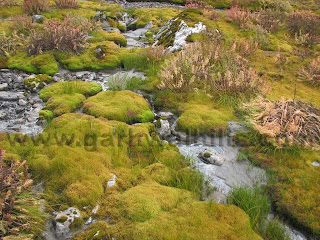 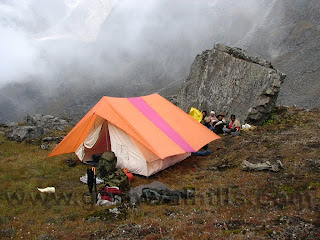 Beauty of this place was awesome so everybody agreed to camped there. Nandi kund was approx. 1 km. from this place. We camped near stream. Other team members visited Nandi kund in evening except me and Pratap. I enjoyed the nature near camping site. It was too cold and I was not having enough clothes so Pratap gave me his woolen coat and coffee which gave a little relaxation from cold. Next morning daily routine job seem a challenge due to cold, however we managed and then moved. First view of Nandi kund was awesome. It was 2 to 2 & ½ km. green blue water lake in circle. A temple is located beside the lake in which we saw some old swords. As per the local people these were the Pandawa’s swords. Lot of rubbish was spread by pilgrims so we collected the rubbish in a bag. Now the sun had arisen. We enjoyed the amazing beauty of nature. Now other team members have reached and they took bath in lake and we did breakfast after Puja . After some time we moved to Ghia Vinayak pass. It was a challenge to find the pass because only devendra had done this trek earlier and he did it in June, at that time that area was snowy and he forgot the way due to different condition. Ghia vinayak pass is approx. 3 km. from Nandi Kund and is a strenuous rocky trail. 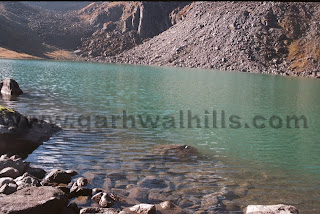 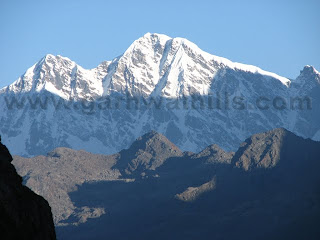 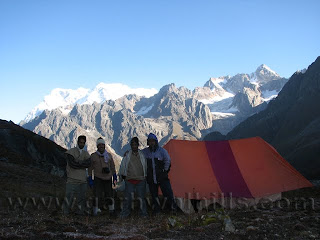 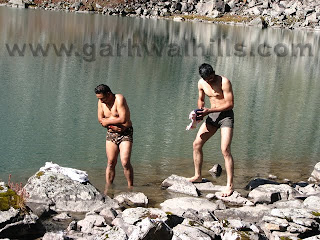 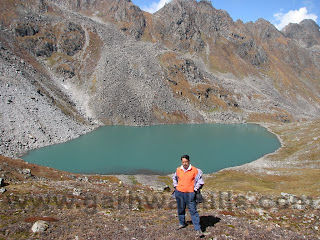 Devendra stood near a rock, kept his baggage and started to search the pass. He could find the pass after a hard job. Now it was 12:00 noon. We did puja at pass and did a photography session. There was an awesome view of Nandi Kund in one side of the pass and the amazing view of Vaitarani river in another side, which was a steep slope without trail which was a challenging task. The whole scene was looking imaginary. Now we were walking on boulders. I was facing problem while climbing down due to feet ache. Suddenly the whole area became misty and we were trailing the way. We walked very slow and reached in a plane area near Vaitarani river. Aachari kona was near to this place from where, one can go to Rudranath ji. We relaxed here for few minutes and then moved, because we wanted to reach Bansi Narayan today. 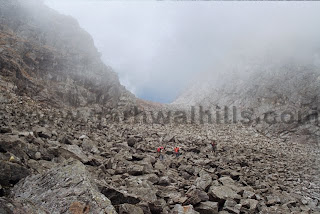 The trek was easy from here and we were following the trail made by Kedarnath forest division. En-route we saw many wild animals and Monal bird. The route goes through Manpai Bugyal. After crossing this we relaxed near a temple (Panch Dyula) and enjoyed the natural beauty. Devendra had not the exact idea about the distance from here, so we were not sure that we could reach Bansi Narayan by evening. Soon we got a camp site and pitched our tent. This place was a dividing zone of tree line and meadow. After Madhymaheshwar all the camping site was with a straight rock at one side. It was beneficial because one part of the tent remain safe from rain water, frost, wind and storm. Ravi seemed tired today as we had done 18-20 km. trek. 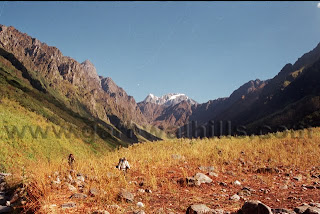 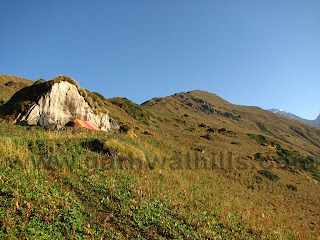 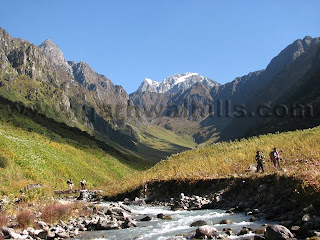 Next morning we started timely. En-route a wide leaf vegetation (fern) which was spread in a big area and giving the feeling of Jurasic park. We climbed down towards a river and crossed it using a temporary bridge and followed the ascent climb to reach at the top. We relaxed near a temple (Jakh Dhyal) where our mobile found network, so we talked to our family members. We ate many fruits (Cucumber, Peach, and Orange ) at temple (offered by pilgrims to God). View of Nanda devi peak was marvelous from here. now the route had changed into a gentle slope. We saw a flock of sheep and a shepherd. We gave him a part of ration & kerosene. We were near the Bansi Narayan Temple. It is an ancient temple built by huge stones. There are caves in nearby rocks where one can stay at night. We did Puja at temple and moved. The route goes through a dense forest from here. En-route we met a bangali group who was going to Rudranath ji. Most of the members of the group was tired and hopeless. 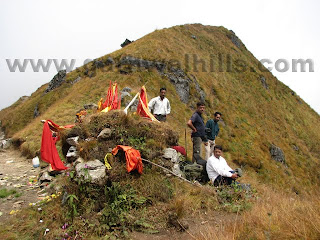 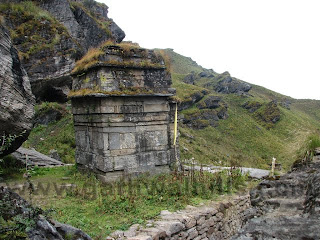 Now we could see the Devgram village, which was looking beautiful. One can reach to Dumuk village from devgram after crossing the ‘Kha Khal’.
Soon we were walking among the traditional cultivated field of ‘Rajma’. Here we ate some pods. We kept our backpacks at Devgram and went to visit Kalpeshwar Temple. Temple was 1 to 1 &1/2 km. from here. With the visit of Kalpeshwar temple I had done my Panch Kedar Yatra (Journey). This temple is different from other Kedar Temple. We saw some archives which was not readable, as per the priest these were written by ‘Pandawas’. Priest did Puja and prepared tea for us. We gave him remaining ration and kerosene. We wanted to reach at road head but we could reach at Salna village before complete dark. We reached in a N.G.O. (Janadesh) office and requested him for night stay. He arranged night stay and dinner.
Next morning we moved early. Helang was only 4 km now. we walked very fast and reached on Badrinath highway after crossing bridge. From here we got the local taxi for Chamoli and from chamoli to karnaprayag, from where we moved to our individual direction. 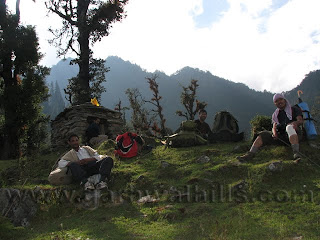 Posted by Garhwal Hills at 5:42 PM